Thanksgiving Matrix in the Year of the Dog

The LORD works in mysterious ways. I’ve heard my grandmother say that many times as a child, in the backwoods of New Bern, North Carolina. Most of the time I would brush off many of her religious statements as old wives’ tales to fill in the vacant sound of the low-country summers as the horn from the cargo train signaled over the railroad tracks by the house my grandfather built. This Thanksgiving I think of my grandmother who all the grandchildren called Mama Retta not only because I miss her cooking, but because my life since she passed (August 25th, 2008) has been a microcosm of that fact – that the LORD works in mysterious ways. And before I go too deep into detail, no I’m not a religious man… in fact, I am a known sinner in Sin City. However, I’d be a fool and a liar to deny that there are Higher Powers at work guiding not only my life, but all of our lives at the same time. My great friend and business partner Joseph Meyers calls this phenomena the Matrix. And this year, I am thankful the Matrix chose me to be a part of this wild Las Vegas adventure ride… and once I tell you how all of this came to be you’d have to agree – the LORD works in mysterious ways… especially so in this Chinese year of the Dog.

Keep it Real. My Mama Retta used to always tell me to keep it real. She wouldn’t just say it either – she’d wound up her fist like she was Sugar Ray Leonard and say, “Keep it..” and release the punch tin my direction and emphasis REAL. And when it came to cooking, she only used real ingredients. From the Jim Dandy grits with the side of deer sausage for breakfast to the slow baked chicken with the candy yams, collard greens and macaroni and cheese for dinner. I would watch my Mama Retta like a child watches their grandmother on a lazy Sunday – a bit bored and a bit hungry, but with more love for this woman than for life itself. As a matter of fact, this woman is a major reason as to why I am still alive today. Nonetheless, the lessons she taught me about keeping it real I carry with me every day. The balance of Life and Death and the struggle to keep it real in the face of so much fake – that’s my life in a nutshell. As a matter of fact, that’s all of our lives in this ever-changing Las Vegas… a mixture of virtual reality turning into augmented reality. Our city is a one stop shop fantasy land. Gone are the days of Hard Rock Hotel and Casino’s Rehab – next are driverless UBER cars on the strip. Wait – what???  Yes, Las Vegas is changing – and as local Las Vegans we can choose to be on top of the change or have the change on top of us. California is coming at a rampant pace – and marijuana is legal. The Raiders are coming to town, and with it all of West Coast Culture. This much is evidenced by Snoop Dogg’s constant Drais performances all summer and now, Light at Mandalay Bay during autumn. Yes, I’m glad to see Snoop performing so much as I grew up on his music. However, Snoop Dogg himself is a blessing, giving praise to the Most High and showing the next generation the way through his award winning Gospel album. At the critical juncture of his stellar music career, Snoop realized the LORD works in mysterious ways. Perhaps he never forgot it. I’m just glad he kept it real! It does appear to be his year after all.

Perseverance. My grandmother always taught me about perseverance – and the Lord is my Shepherd (23rd Psalm). Lord knows I needed her wisdom! 2018 hasn’t been an easy Year at all. Many can’t tell but not only am I a two-time survivor of traumatic brain injury, I also has an aneurysm stroke last year that left me with homonymous hemianopia. This was stemming from a bout with cardiomyopathy that had me on Sudden Death watch a couple of years prior combined with endless stress. This means that I am legally blind. And life then got very difficult for me – mainly because I had no support structure.  I lost my immediate family and everything I’ve owned, and I ended up homeless earlier in the year. Last year I was working on a campaign for a Fortune 500 company and saw my works make others money. Then I ended up without a pot to piss in, sleeping on park benches. Reminiscing on my grandmother, I’m realizing everything was biblical. Perhaps I had a Jonah in the belly of the whale moment – perhaps I had a Job moment, where I couldn’t question God while he was testing me. Perhaps it was a bit of both. But a lady, a white lady in a Trump economy at that, helped save my life in more ways than one. And just like my Grandmother and my own mother, without her this story would have never came to be. Joe calls this a Matrix, and Matrix is a term coming from matriarchy in the study of linguistics. It means the mother. In fact, the lady that helped save me is his mother. Therefore, this Thanksgiving I’m very much in tune with feminine energy, and grateful for all of it. Exactly how? That’s another story for another day. Some say I had a stroke of luck. Just believe me when I say the LORD works in mysterious ways.
Gratitude. Joe Meyers and I, during my crazy recovery process, would talk on the phone often. Joe lives in the Wine Country in Sonoma County for the most part and spends his time in Las Vegas working on an initiative that we started together called Life Support Media. And just like the Oakland Raiders, the idea of Life Support Media started in the Bay and is going to flourish in Las Vegas. I’m just a tool in that regard, as Joe is the son of a business titan. Recently Life Support Media has merged with another company, Talent Pound, which is a subsidiary of Dogg Pound – the clique that Snoop Dogg started. Once in a while you’ll hear our artist development commercials on 97.5 FM radio. As fate would have it, Lil Nate Dogg, the son of the great legend Nate Dogg from Dogg Pound is on two of my songs, that Joe produced. And on Thanksgiving we are going to launch our music videos, after the Snoop Dogg concert at the Orleans on November 24th.  This is the year of the Dog and this is a West Coast legacy. Even though I am not from Las Vegas (Chocolate City stand up), I have found a home here.  And not only are we at Life Support going live during November 24th, we are also going to celebrate our official signing of our Universal Records deal that day as well. It’s crazy how all of this came to be – but I am very thankful this Thanksgiving.
Celebrate. Joe Meyers and I formed a music team called MaATR1X in which he is the producer and I am the lyricist. The name of our album is called “His Story Explained.” Historically speaking, thanksgiving isn’t really a holiday that I am used to celebrating with white people. However, our life path has given a different meaning to the holiday. Joe is my brother – and I’ll tell the world. It happened against all odds in a world that is so different than the one he lives in, so different from the world I was raised in. I’m from the East Coast, but I found a home in the West. Las Vegas is a town where anything can happen. Therefore I choose to smile in the ever changing face of Sin City. Halleluiah anyhow! This has to be the Matrix… we’ll just put the “1” in and take out the “I” because it’s a team effort. Shout out to Sophia Stewart, who gave me the blessing at a Wyndham resort. We at Life Support Media are eternally grateful.

GOD is GOOD. Thank you for reading this article. This is the first article I have written since my stroke, and I’m doing it on a cold Veterans Day morning. So I ask of you, if you are in Las Vegas, come out and celebrate with us. Thanksgiving is Snoop Dogg’s Turkey Jam. I don’t know if you have a lot to be thankful for, but I certainly do. It feels as if I’m caught up in a Matrix. But my grandmother taught me to always keep it real. She taught me to persevere and that the Lord is always my shepherd. I miss her wisdom, but it is still with me. I miss her cooking, but I know some recipes. And in this year of the Dog, working with the Dogg Pound and listening to Snoop Dogg’s library of works (that the radio routinely plays nowadays) I leave you with words from my grandmother: The LORD works in mysterious ways… and He blessed us immensely in this year… of the Dog! 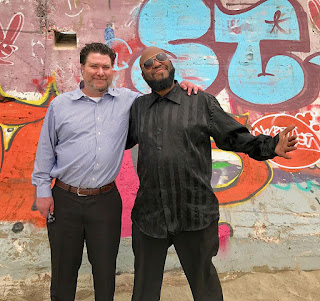 Posted by Verse the Legend at 10:53 PM No comments: